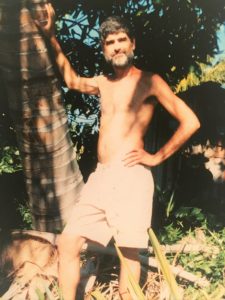 A little after 9 a.m. on November 2, 2003, a hunter discovered the decomposed body of a man in a remote area off of Saddle Road (Route 200) near the 12 mile marker in South Hilo. Suspicious injuries were observed and foul play was suspected. An autopsy determined that the man died as a result of severe blunt force injuries and the death was ruled a homicide.

No identification was found with the decedent and although fingerprints were obtained, there were no matches in the AFIS database to make a positive identification. With advances in technology, in April 2016 the man’s fingerprints were sent to the Hawaii Criminal Justice Data Center in Honolulu and searched in the FBI’s NGI (Next Generation of Identification) database, resulting in the man being positively identified as Bradley Bussewitz, age 47. He was also known as Bradley Adair.

Now identified, investigators learned that Bussewitz was originally from Wisconsin and had lived on the Big Island between 1988 and 1989 and was known to live in San Luis Obispo, California, in 1996. Investigators determined that Bussewitz lived on Maui in May 2003 prior to returning to the Big Island and lived at various locations around Hawai‘i Island, including Puna, South Hilo, Ka’u, North Kohala, and Kona.

Bussewitz liked to grow his own food and was a vegetarian and also played the didgeridoo wind instrument.