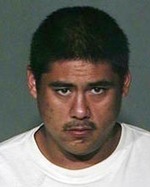 Big Island police have arrested a Kaʻū man who will be featured on an episode of “Hawaiʻi Island’s Most Wanted” that was prerecorded and is scheduled to debut today.

Nathan Cakin, 31, of Pāhala was wanted in connection with a domestic confrontation in Pāhala on July 3.

He was arrested Friday afternoon (July 22) at Hilo Medical Center. He is being held at the Hilo police cellblock on suspicion of kidnapping, unlawful imprisonment, reckless endangering, assault, abuse of a family/household member, unauthorized control of a propelled vehicle, theft, two counts of terroristic threatening and an unrelated warrant of arrest.

The episode of “Hawaiʻi Island’s Most Wanted” that features Cakin will air on Na Leo O Hawai’i Community Television Channel 54 tonight at 5:30 p.m. and Sunday at 5 p.m.