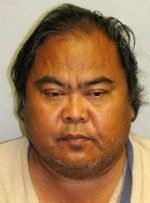 The first was at a home on 38th Avenue in the Orchidland Estates subdivision. A crowd of more than 100 persons dispersed when Vice officers arrived on the scene, which included a makeshift arena behind the property’s main structure.

Police arrested 55-year-old Christopher C. Velasco, who lives at that address, and charged him with 23 counts of animal cruelty. His bail was set at $11,500.

The case is continuing pending further investigation of other persons involved in the illegal cockfighting operation.

The second cockfight was on Lehua Street in the Fern Acres subdivision. When officers arrived there, about 80 persons dispersed from behind a house with another makeshift arena. Vice officers recovered approximately 3.1 grams of crystal methamphetamine packaged for distribution that had been abandoned next to the arena.

Police ask than anyone with information about illegal cockfights call the Vice hotline at 934-VICE (934-8423).