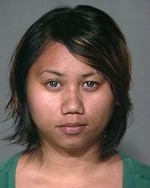 A 22-year-old Kona woman has been charged with reckless driving and other offenses in connection with a domestic road incident Monday (August 1) in Kailua-Kona.

Kahea Reyes of Hōnaunau was charged at 2:45 p.m. Wednesday (August 3) with reckless driving, two counts of reckless endangering, two counts of terroristic threatening, three counts of criminal property damage and driving with a suspended license. Her bail was set at $16,000.

At 6:15 p.m. Monday, police received a report of what was described initially as a road rage incident on Palani Road.

As the vice officer radioed for backup and turned his car around to pursue the vehicles, he observed both vehicles stopped on the shoulder of the roadway. Reyes, who had been driving the car, got out and ran toward the truck, occupied by a 20-year-old Kailua-Kona man and his 17-year-old female passenger. The vice officer detained Reyes until patrol officers arrived to take control of the scene and arrest her.

Patrol officers determined that Reyes was the ex-girlfriend of the driver of the pickup truck. She reportedly had been following the truck from Palani Road and had attempted to run it off the road three times on Hinalani Street by ramming it in the side and rear.