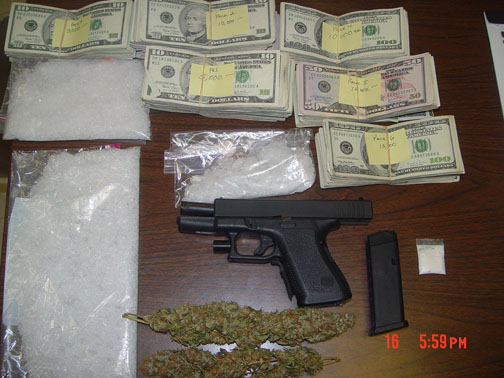 Some evidence recovered during a raid in Hawi on June 14.

The men were identified as father and son Douglas Farrar Sr., 42, and Douglas Farrar Jr., 22, and Darryl Daniels, 45, all of Hawi. They were arrested after officers recovered 1,635 growing marijuana plants, 14 pounds of dried processed marijuana, an ounce of hashish, and sophisticated growing equipment while executing a search warrant at their home.

In addition to the marijuana plants, officers recovered approximately 18 ounces of crystal methamphetamine as well as a handgun that was reported stolen in Honolulu.

Darryl Daniels was charged with commercial promotion of marijuana, promoting dangerous drugs, and two counts of drug paraphernalia. Bail for Daniels was set at $8,000.

All three were released after posting bail.

The estimated potential street value of the recovered marijuana was more than $1 million and the crystal methamphetamine or “ice” was estimated to be worth more than $78,000.

Anyone with information about this case is asked to call Officer Jeremy Lewis of the West Hawaii Ice Task Force at 326-4646, extension 307 or the police non-emergency number at 935-3311. Tipsters who prefer to remain anonymous may call Crime Stoppers at 329-8181 in Kona or 961-8300 in Hilo. Persons with information about drug trafficking may call the Drug Interdiction Hotline at 326-4197. All calls to Crime Stoppers and drug information hotlines are kept confidential.