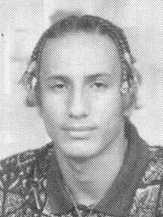 Hawaii County police are looking for a 16-year-old boy who has been missing from his residence in Hilo since December 31, 2000. He is Adam Sellers.

The missing boy is described as being Caucasian, being 6 feet in height, weighing about 150 pounds and having short brown hair, partially bleached, and brown eyes.

Anyone with information about his whereabouts should contact Officer Peter Kualii of the Juvenile Aid Section at 961-2373 or the police non-emergency telephone number at 935-3311.