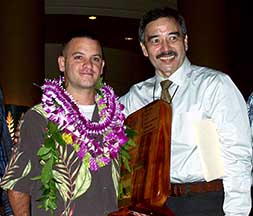 At a dinner ceremony on September 26 at the Water’s Edge Ballroom of the Hilton Waikoloa Resort, Prudencio was honored for his work as a vice officer in the Ice Task Force, which is part of the department’s Area I Vice Section.

Prudencio initiated 362 cases last year and arrested 73 suspects for a total of 308 charges. The average case load and arrest rate for the Area I Vice Section during that period was 189 cases, 41 arrests and 142 charges. In addition, Officer Prudencio drafted and served 42 drug-related search warrants.

Prudencio was honored for being a dedicated self-motivated and focused officer who is a natural leader, a team player and someone who generates detailed reports to document his cases. He was also recognized for his undercover work off island to assist other police departments.