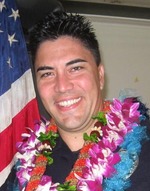 Lewis had already been honored twice this year as “Officer of the Month.”

In April, he was was recognized for his investigation of an unauthorized entry into a motor vehicle case. The case ended with the arrest and successful prosecution of suspects involved in multiple car break-ins targeting tourists. Since then, the Kailua Village area has experienced a downturn in such crimes.

In June, Lewis received an award for his investigation of financial crimes stemming from a burglary and the theft of laptop computers and two credit cards. Through his efforts, Lewis identified two female suspects and initiated 49 additional offenses against them. They were charged with multiple felony financial crimes.

The Kona Crime Prevention Committee is an organization that encourages community involvement in aiding and supporting police in West Hawai’i.