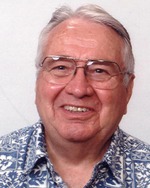 Big Island police are searching for an 82-year-old Hilo man reported as missing.

Merle Bensema was last seen around 8 a.m. at his Hilo home Tuesday morning (August 23). He may have driven to the Waikoloa area. He has a medical condition that requires medication.

Bensema is described as Caucasian, 5-foot-11, 215 pounds with a stocky build and a fair complexion. He has short white hair, blue eyes and wears glasses. He is possibly operating an older-model silver Ford Ranger pickup truck.