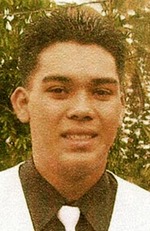 Big Island police are searching for a 19-year-old man who was reported missing.

Kyle Wana was last seen at his Hilo home at 1 a.m. Monday.

He is described as Hawaiian-Filipino, 6-foot-3, 195 pounds with brown eyes and black hair.

Police ask that anyone with information on his whereabouts call Officer Erhard Autrata Jr. at 961-2213 or the Police Department’s non-emergency line at 935-3311.