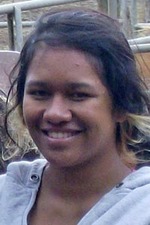 Big Island police are searching for a 16-year-old South Kohala girl who was reported missing.

Judie Kahele-Taetuna was last seen on Opelo road in Waimea on June 2.

She is described as Hawaiian, between 5-foot-6 and 5-foot-9, between 145 and 169 pounds with brown eyes and black hair partially died blond.

Police ask that anyone with information on her whereabouts call the Police Department’s non-emergency line at 935-3311.