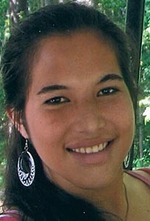 Big Island police are asking for the public’s help in locating a 19-year-old Pāhoa woman who was reported missing.

Zoe Domizio is described as Caucasian, about 5-foot-9, between 210 and 230 pounds with shoulder-length black hair, brown eyes and a fair complexion.

She was last seen in Keaʻau on Friday (April 22) around 2 p.m.  She may be in the company of two other females and may be in the Keaukaha area of Hilo.

Police ask that anyone who may have seen Domizio call Detective Reed Mahuna at 961-2384.