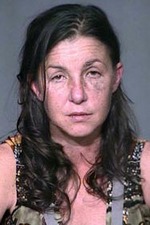 Big Island police are renewing their request for the public’s help in locating a 42-year-old North Kona woman who was reported missing.

Naomi Sanders left her Kainaliu home the night of June 6.

Police received a tip about a possible sighting on June 7 or June 8 on Hualālai Road above Lako Street in Kailua-Kona. She was wearing sweat pants and a grey hooded sweatshirt.

Sanders is described as Caucasian, about 5-foot-3 and 120 pounds with brown hair and hazel eyes. She has a tribal print tattoo on her upper right arm in the shape of an arm band.

Police ask that anyone with information on her whereabouts call Lieutenant Gerald Wike at 326-4646, extension 266, or the Police Department’s non-emergency line at 935-3311.