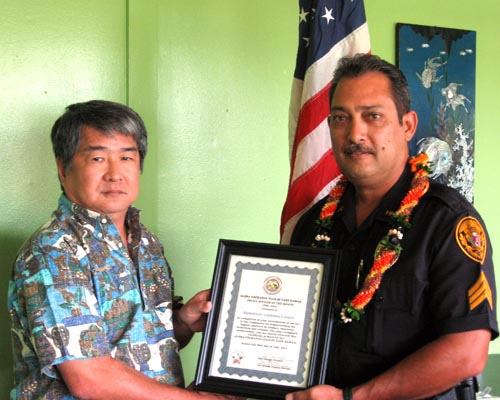 The Aloha Exchange Club of East Hawaiʻi recognized Sergeant Juergen Canda on Thursday (July 28) as “Officer of the Month” for July.

The Puna sergeant was honored for arresting a highly intoxicated reckless driver who had evaded police and national park law enforcement officers for an hour while drinking and speeding from Kaʻū into territory patrolled by the National Park Service.

Sergeant Canda had just made a speeding traffic stop near the 24-mile marker in Volcano when he headed toward the Hawaiʻi Volcanoes National Park boundary to intercept the reckless driver. Within a minute, he encountered the driver swerving down the wet Volcano highway in busy traffic going 93 miles per hour. When Canda pulled the driver over, the man restarted his vehicle, sped off in the Hilo direction, turned into a subdivision and ran his vehicle off the road. Canda subdued two occupants who were attempting to flee while the driver ran into the forest.

When backup officers arrived, Canda conducted an extensive hour-long search until the suspect was located and arrested. The man was later charged with DUI, reckless driving, resisting an order to stop, driving without a license, driving without insurance, excessive speeding and accident involving property. His blood alcohol level was nearly three times the legal limit.

Lieutenant Glenn Uehana nominated Canda for the recognition of his good work. “Sergeant Canda’s dedicated efforts to make the roadways safer for the citizens and visitors of Hawaiʻi County prevented what was sure to end in a tragedy, as this dangerous driver headed into the populated areas during heavy weekend traffic,” Uehana wrote in nomination papers.