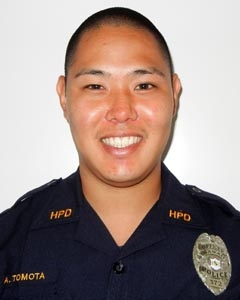 The Kona Crime Prevention Committee recognized Officer Aron Tomota  as “Officer of the Month” for October in a luncheon ceremony on Wednesday (October 5) at Huggo’s restaurant in Kailua-Kona.

Tomota’s peers in Kona Patrol’s “C” Watch nominated him for being a model officer who epitomizes the Police Department’s core value of Teamwork.

Sergeant Grad Elarionoff said in nomination papers that Officer Tomota consistently helps his fellow officers with their investigations without complaining or boasting.

“I can not place a value on the work Officer Tomota does. It is not something that can be measured statistically,” Elarionoff wrote. “I can, however, attest that Officer Tomota is of great value as an officer to Kona “C” Watch, the Kona District and, more importantly, to our community.”

As “Officer of the Month,” Tomota is eligible to become “Officer of the Year.” The Kona Crime Prevention Committee is an organization that encourages community involvement in aiding and supporting police in West Hawaiʻi.