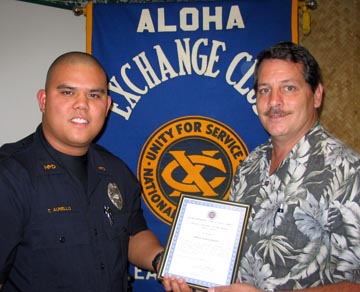 Joseph Gutierrez, right, president of the Aloha Exchange Club of Hilo,
presents an "Officer of the Month" award to Tuckloy Aurello on Thursday, September 28.

The Aloha Exchange Club of Hilo recognized Puna Patrol Officer Tuckloy Aurello as "Officer of the Month" for July in a luncheon ceremony last week (September 28, 2006).

Aurello’s former supervisor, Sergeant Samuel Jelsma, recommended him and commended him for his professional attitude, his appearance, his demeanor, his motivation and his willingness to help his fellow officers.

In June, Aurello assisted in investigating a burglary in which someone removed $20,000 worth of jewelry and other items from an oceanfront home in the >>Hawaiian> >Paradise> >Park>> subdivision. Aurello volunteered to canvass the neighborhood and found witnesses who remembered seeing suspicious activity by two men in a van. Aurello asked them to notify him if they saw the van again. Within a week, the witnesses were able to provide Aurello with a license plate number. Puna police identified the suspects and referred the case to detectives.

According to Jelsma, Aurello’s extra effort will reduce the number of future burglaries. "Officer Tuckloy Aurello truly cares about the victims in these investigations," Jelsma said. "It is more than just ‘pulling a number’ and ‘filling in the blocks’ to him."

The East Hawaii Officer of the Month award is a project of the Aloha Exchange Club of Hilo.