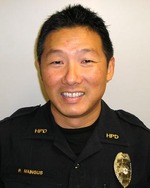 The Kona Crime Prevention Committee has recognized Officer Paul Mangus as “Officer of the Year.”

In a luncheon ceremony on September 12 at Huggo’s restaurant in Kailua-Kona, the school resource officer was honored for immediately investigating a report of child abuse he received while at Kealakehe Intermediate School. When Mangus and other officers responded to the child’s house, they found the injured child with evidence that he had been bound and whipped.

The boy’s mother and her boyfriend were both arrested and charged with numerous offenses, including assault, endangering the welfare of a minor, unlawful imprisonment and abuse of a family/household member.

Detective Renee Morinaka, who initially nominated Mangus for “Officer of the Month,”  said the officer’s actions “saved this child from further abuse and possibly saved his life.”

“The Kona Crime Prevention Committee is an organization that encourages community involvement in aiding and supporting police in West Hawaiʻi.