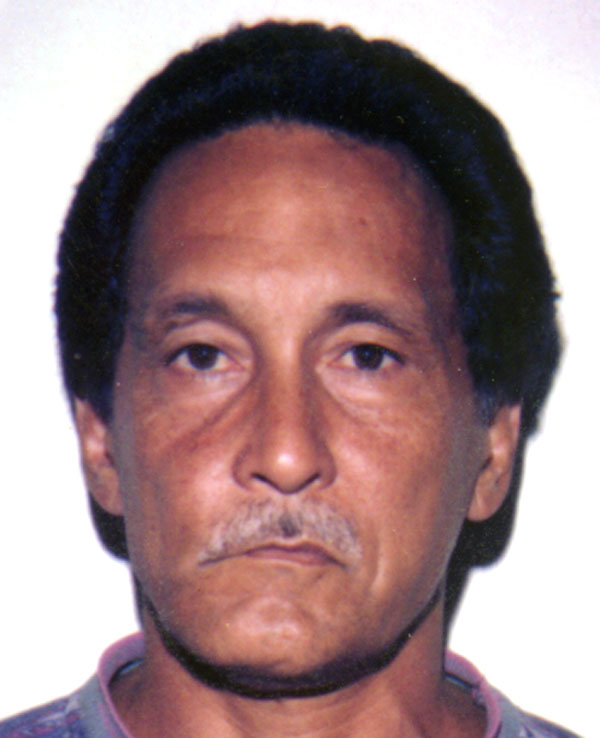 MILTON CARTER
…wanted for a variety of offenses

Police are asking for the public’s help in locating a suspect wanted on several warrants and serious traffic violations.

The suspect was identified as Milton Carter, 56, whose last known address was in Leilani Estates, Puna.

The suspect avoided a DUI sobriety checkpoint about 7 p.m. on August 8, 2002, on Kawaihae Road.

Traffic Enforcement officers conducting the checkpoint observed a 1992 GMC Pickup truck evade the checkpoint and, in the process, commit a traffic violation. Traffic officers stopped the vehicle, but as an officer approached the driver’s door, the truck sped off in the Kona direction on Kaahumanu Highway (Route 19).

Traffic officers pursued the vehicle, but the driver disregarded the officers’ flashing lights and sirens. The truck sped down the highway without lights and recklessly overtook several vehicles. Because of the dangerous driving behavior of the suspect and his apparent lack of regard for the safety of other motorists on the road, pursuing officers were eventually forced to drop back and monitor the speeding truck from a distance.

The truck continued on Queen Kaahumanu to the area near the Waikoloa junction. There, it turned around and headed back toward Kawaihae. It continued heading north until it reached Puako, eventually ending up near the Hapuna Prince Hotel. The truck then drove some distance off the pavement and into soft dirt and got stuck.

By the time officers were able to reach the truck, the suspect had already fled on foot. Officers recovered the vehicle as evidence, and the suspect was later identified as Carter.

Police are seeking Carter for reckless endangering during his attempt to evade pursuing officers. This occurred when his truck passed vehicles on a blind hill and narrowly missed an oncoming police SUV, which had to swerve onto the shoulder to avoid a collision. The near-collision was recorded on a police video recorder.

Carter is also being sought on an unrelated state bench warrant for the offense of sexual assault. His bail on the bench warrant was set at $32,000. A federal warrant of arrest to revoke his federal probation also exists, and the suspect is to be held without bail on that violation.

Although Carter’s last known residence was in the Puna District, police say he may currently be residing in West Hawaii.

Anyone who witnessed the actions of the suspect in fleeing police officers or anyone with information about Carter’s whereabouts is asked to call Officer Bradley Freitas of the Kona Traffic Enforcement Unit at 326-4277 or the police non-emergency number at 935-3311.