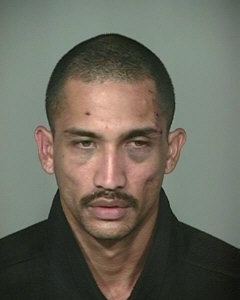 Big Island police arrested the second inmate who escaped about two weeks ago (June 21, 2005) from the Hawaii Community Correctional Center (H.C.C.C.) on Punahele Street in Hilo.

Kyle Keola Quilausing, 31, was arrested at Ainaloa Subdivision, Puna District, Friday afternoon (July 1, 2005) after Puna police officers apprehended him during a foot chase on the roadway within the subdivision.

At 4:56 p.m., police recognized Quilausing as being a driver of a vehicle that was reported stolen from the South Kohala district earlier this week. When Quilausing realized he was being followed by officers, he stopped the vehicle on the roadway and ran into a nearby brush area to evade police. Shortly after, he was observed running from the brush and a foot chase ensued resulting in Quilausing being apprehended. Quilausing was arrested for Escape, Second Degree. He is being held at the Hilo Police Cellblock pending further investigation.

Police also arrested Fanny Pomaikai English, 18, for Theft, Second Degree (Auto). English was a passenger of the stolen vehicle when stopped by police. She is also being held at the Hilo Police Cellblock pending further investigation.

Quilausing and Ludivico Lazo, 35, escaped from the H.C.C.C facility by tying bed sheets together, climbing up about 18 feet, and escaping through a window in the sunroof area of the facility. Both escapees were last seen heading down Waianuenue Avenue in Hilo. Lazo was arrested and charged earlier this week (June 27, 2005) after he turned himself in to police.