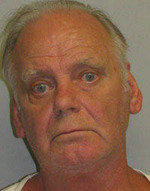 Detectives of the Hawai’i Police Department Hilo Juvenile Aid Section acting on information obtained from officials from the Bucks County District Attorney’s Office and the Bristol Township Police Department of Pennsylvania apprehended a 66 year old man on Tuesday afternoon (August 2, 2011) who was wanted in the state of Pennsylvania for rape of a minor. Albert August Zuest was arrested under the strength of an arrest warrant.

Zuest is being held without bail at the Hilo Police Cell Block pending an extradition hearing in Circuit Court.