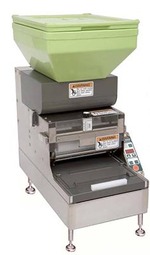 A sushi maker similar to this was stolen in a burglary

Big Island detectives are investigating the theft of a sushi maker during a February burglary in Hilo.

On February 20, South Hilo patrol officers responded to a business on the 700 block of Kīlauea Avenue and learned that a large maki sushi maker valued at $12,000 had been removed during a burglary sometime between February 19th and 20th.

The electric appliance weighs nearly 100 pounds, stands about 20 inches high and is about 22 inches long and about 14 inches wide. It is an Autec brand, model ASM830A and may not have the green rice hopper affixed to the top, as is depicted in the image above.

Police ask that anyone with information on the location of the sushi maker or any other information about this case call Detective Derek Morimoto at 961-2380.