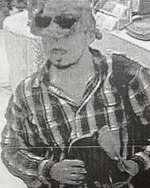 Big Island police are asking for the public’s help in identifying a theft suspect whose image was captured on a surveillance video.

The suspect, who told a German couple his name was Gary, may be homeless and living in the Kona area. He met the tourists in Kona in January and offered to show them around the island.

On January 22, he rode to Hilo with the couple in their rented van. They stopped at a shopping mall, where he removed two Quiksilver trucker hats from a department store and then returned to the parked van. When a store security guard approached him in the parking lot, the tourists jumped out of the front seat of the van and the suspect moved into the driver’s seat and drove away.

The van was recovered that evening at the Hilo airport parking lot.

Police ask that anyone with information on the suspect’s identity call Officer Duffy Duldulao at 961-2213 or the Police Department’s non-emergency line at 935-3311 .