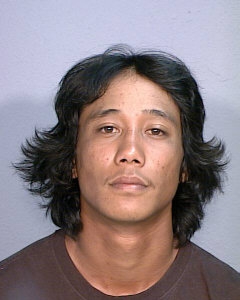 Keola Bergau
…wanted in connection with an assault.

Police are asking for the public’s help in locating a man wanted in connection with an assault that occurred on January 28, 2011 in the Puna District.

Puna patrol officers responded to a Seaview Road address in Nanawale Estates to a reported affray at about 3:45 pm. A 53 year-old Pahoa man sustained injuries as a result of the assault and was subsequently transferred to The Queen’s Medical Center on Oahu where he was initially listed in critical condition.  His condition has since been upgraded to stable.

Police are looking for Keola Bergau of Pahoa in connection with this assault. Bergau is described as a local male about 5 foot 10, 120 pounds, black hair with brown eyes. It is believed that Bergau’s appearance may have been altered, as his hair length may have changed since the above picture was taken in 2005.

Police ask that anyone with information about Bergau’s whereabouts call Detective Reed Mahuna at 961-2384 or the Police Department’s non-emergency line at 935-3311.