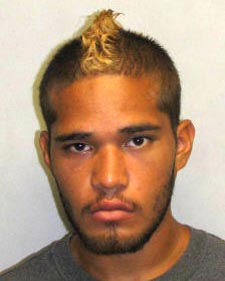 Big Island Police are looking for a 19-year-old man in connection with an armed robbery in Hilo the Saturday morning (September 3) at a convenience store in Waiākea Uka.

South Hilo patrol officers responded to a 6:16 a.m. call reporting that three male suspects entered the store and then one of them suspects pulled out a gun, showed it to the clerk and ordered her to open the cash register. The suspects made off with an undisclosed amount of cash and merchandise.

The employee was not physically injured.

Detectives from the Area I Criminal Investigations Section continued the investigation. On Thursday (September 8th), they arrested two 17-year-old boys and charged then with first-degree robbery and first-degree terroristic threatening.

Detectives now would like to question 19-year-old Stetson Kaholo of Hilo in connection with this investigation. He is described as 5-foot-8 with a medium build, brown eyes and a tan complexion. Kaholo is known to frequent the Lanakila housing area of Hilo.

Police ask that anyone with any information about this case call Detective Grant Todd at 961-2385 or the Police Department’s non-emergency line at 935-3311.