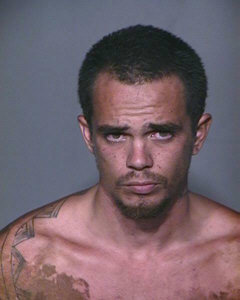 Big Island Police are requesting the public’s assistance in locating a man wanted for an outstanding bench warrant related to a burglary, stolen vehicles and drug offenses.

29 year-old Kaulike Rice is wanted in connection with a recent indictment handed down by a Grand Jury. The indictment charges Rice as being responsible for a burglary which occurred in Holualoa this past September 10th in which computer equipment, vehicle documentation, lawn care equipment, a large amount of savings bonds and a significant amount of jewelry was taken. The total value of the items taken in this burglary was approximately $75,000. In addition, the indictment also charges Rice in connection with four stolen vehicle investigations, resisting arrest and drug offenses.

He is described as 5’9″ tall, he has brown hair with a medium build and numerous tattoos including a tribal type of tattoo on his right arm from the shoulder down, “Manoa” on the small of his back and a partial Hawaiian flag on his right calf.

Police ask that anyone who may know the whereabouts of RICE is asked to call the Police Department’s non-emergency line at 935-3311. Tipsters who wish to remain anonymous may call Crime Stoppers at 961-8300 in Hilo or 329-8181 in Kona. All Crime Stoppers information is kept confidential.